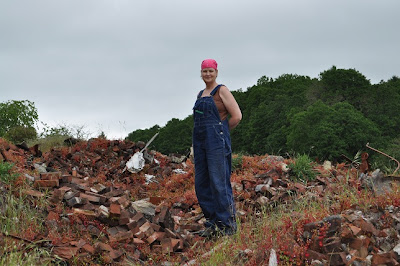 Two weeks ago I was a young girl full of energy and confidence with bright ideas and a bit of grit to boot. Then I became a brick picker. Okay okay, I FELT like a young girl until I began to loathe body and soul my bright idea of HH and me digging and rooting around a brick heap for three days. Or more precisely several mountains of weed and brier covered bricks that were once the Log Cabin Tavern.
The Log Cabin Tavern used to be a three story brick and mortar structure built at the turn of the century in our “Great LittleTown“. Conveniently located across the street from the old Carlton Depot, an early train station presently owned and carefully preserved by
Ken Wright Cellars, along the old railroad grade next to a granary.
The Log Cabin became a popular destination hot spot for western music and dancing before burning down in the Eighties. And before the owners dumped the whole ruin and it’s contents in their pasture for the brave (or crazy middle aged) souls wanting to test their mettle salvaging vintage brick.
Each day we woke up sore and whining as we drug ourselves out of bed to head back to the brick heap. No sooner was I relieved from stooping and digging for near perfect brick to start tossing the brick then I was happy to be back stooping and picking again. I’d toss the goodins’ to HH, he sat them down, I’d move to his pile, he’d move closer towards the pick up, and we’d do the same grueling process again. Then we picked them up out of the pasture, IE; the ones that didn’t break, and stacked them in the truck. We picked and handled in this way over 700 bricks! And God willing, I vowed never again to fancy such youthful hubris, EVER. 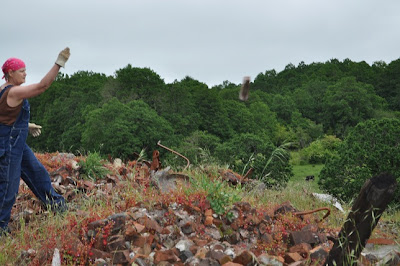 HH, bless him, wore small holes in the fingertips of his leather gloves from catching and stacking all that brick but bless my brick pickin’ heart, in all that tossing I never beaned him once!
He also bruised his forearms from toting his self imposed limit of 5 bricks at a time and not one less. Training he acquired as young man working in a brick yard in Utah. Of which stories I heard repeatedly for three days on the brick heap. Of course he was young and buff back then and of course, hot and sweaty, and of course, tanned from working without a shirt and of course so was his wife, young and buff that is, back then, and of course with a shirt, back then. 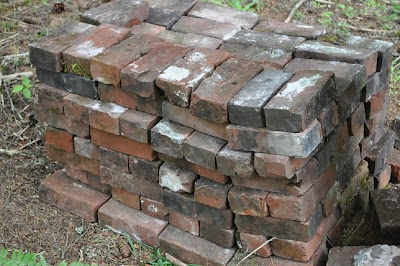 We have several piles of beautiful vintage brick. Some red, some pinkish and mottled with old mortar, and the black and burnt survivors, the twice fired ones. Even some flawed ones that we discarded at the beginning because they were too chipped or warped, after three days of grunt, we saw in a new light. Those would now be our prized premium bricks with character and each one will have it’s special place in the greenhouse.
P.S. You’ll be the first ones to see. I promise.

One thought on “My Life as a Brick Picker”