I read this article in the newspaper recently with the phrase, “The Slow Home movement advocates designing for an easier life”. It was stated that the average home built before 1950 was slow by design. That these homes are often simple, but they work.

We live in such a home. And it overly qualifies in simplicity because it was built here in the Pacific Northwest foothills of the coast range called the Trask Mountains 100 years ago. And it stretches the term “slow” to a “crawl”.
I think a home built in the 1950’s may have had more amenities than our place. If I could describe our abode “Little House on the Prairie” would be my first choice but then maybe “Little Box in the Woods” as our children refer to their childhood home might be a more accurate picture, but I like the image the first connotes better, and I’m writin’ the story okay?
Our 2 level cottage is just a tad over 1000sq. ft. The living area (and man has it seen a lot of livin”) would be half that and is the footprint our lovingly referred to “box” in the woods. With a small but welcoming rustic wood covered porch out front. It is a solid little “box” at that and was constructed from rough sawed full dimension lumber milled close to site for there were many sawmills in the area tucked into hill and holler as was the livelihood of folks living in the woods.
Within is a kitchen, living and only bathroom with small laundry room on the main level and three tiny rooms tucked up under the roof eaves for a Mom & Dad, 2 daughters and 1 son. We have a year round spring that serves our homestead but logging over the years has made it slightly too murky for us and we have a well for home use now, and we use the Spring for outside purposes. Wood continues to be our sole source of heating. Over the years when we could afford it we made improvements, but have never enlarged the size of our home. Our kids lament that we finally got a shower after they grew up and moved out, but hey, we could finally afford one. But now grown they have also said they feel that they are more appreciative of what they have in life and don’t require a lot of material wealth to be happy and that makes us feel less remiss about their frugal upbringing. What they did receive in abundance was warm fires and home cooking, love and stories, furry kittens, faithful dogs, plucky chickens and a mean rooster, long pony rides in the woods and knowledge of a Savior who loves them. And a place to bring their own chillin’s home to now and again.
I would surely be remiss if I didn’t mention that a small “slow home” won’t allow for frivolity of collections of miscellaneous items that don’t serve a purpose or create too much clutter. Such things cry “too much” and are dealt with in short order. This could be shoes, clothes, toys, toiletries and even *grimace* books. And clutter happens, I know! A “slow home” can by experience find itself in an constant and undesirable state of flux. A continual gather and purge dilemma can ensue if your not careful. If your like me and are decidedly undecided about a purchase, it’s a good thing. We get to avoid de-cluttering said purchase later.
So all this “slow” forward momentum takes practice (a lot of practice) developing skills to sustain it. It’s a lot of work to live simply. But it’s a good kinda work. And the sleep you earn will be a peaceful one. 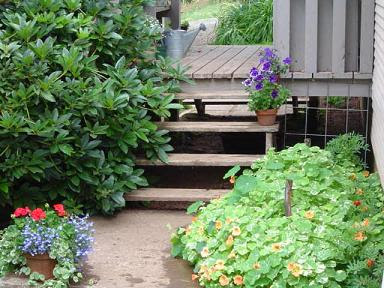 Welcome friends
Slow Home
P.S. This reminds me of another story, the one about why I can never have anything nice. It’s true. Later.