Here’s another installment from my day at the La Casa Verde green home expo I attended a few weeks back. There was so much jam packed into that day really. Even a lovely little wine tasting I will mention later after I (hopefully) complete the last little tidbit of that fun and informative day.

The event sponsored two short seminars. One of them was on permaculture (more about that later) and also a seminar by a neat couple of guys, John Mead and Carson Benner who own a local construction company called Cellar Ridge Custom Homes. It was free! (that oh so lovely word) and so what I learned I will freely pass on to you dear reader. 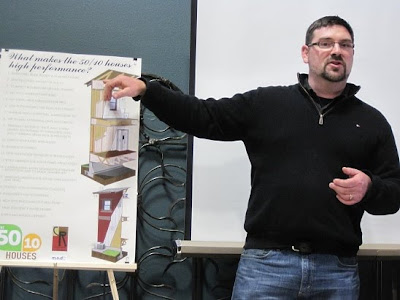 Cellar Ridge is a forward green minded custom home building company. Their concept is too build homes that are 50% more energy efficient for only 10% more added cost than the traditional to code building. They dismiss the idea for expensive solar panels as the first choice in making a home more energy efficient. In fact they explained to us that simply adding more insulation, caulking at the point of framing, southern orientation and energy efficient windows with pergola or overhang for summer cooling as a more common sense approach, as well as reducing the numbers of windows on the northern side of the house. Doesn’t it just seem like a no brainer?
The new twist to me on some of these old time energy conservation methods was the preference of Cellar Ridge to build garages that are separate from the main dwelling with a breeze way connection, and usually situated behind or near the back of the house. They suggest that the common method of placing the garage at the front of the house is visually unappealing (dubbed, snout houses) and that these ugly snouts (garages) frequently share a common wall with the home and subsequently siphon energy from it. So true! 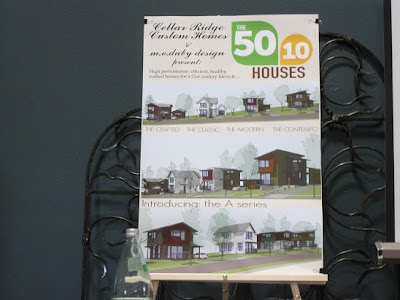 Their home designs had an old era appeal to them and their contemporary designs weren’t over the top contemporary but seemed very warm and inviting. 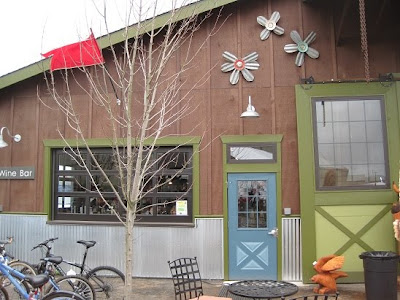 The Saturday Market is housed in this old farm building in the Granary District and shares a common outdoor area shared with other converted farm buildings. Cellar Ridge implemented much of their design and energy efficiency options to the old place. I particularly like how they kept the barn theme intact and the color choice is very pleasing don’t you think?
Up next? Permaculture. Can you dig it?

One thought on “Energy Efficient Homes”