Skip to content
I got duped this weekend. Saturday we were spoiled with beautiful 66 degree weather! I poked around a bit in the garden, contemplating planting season. I even cut back and deadheaded the herb garden some. The Purple Globe Thistle, Yarrow and Catmint look all tidy now. I mused quietly to myself my sentiments about not tidying up the garden to early.

“Don’t get ambitious yet! Don’t be fooled, Back up from the Peonies, right now!!”

Sure, I like to think I have learned by now not to be tempted by errant sunny weather in early March. But dadgum it, it was a spring like 66 degrees!! Honest. So, I

blissfully clipped and scraped away a lot of dead plant material. Ack! Don’t do what this cottage woman did, do you hear me? Listen up.

Or go ahead and learn the hard way (again & again) like I did and wake up to a chilly 30 degrees and a light frosting of snow. But, at least I inflicted this cruelty mostly in the herb garden. Those chillins can take fair amount of abuse.

The vegetable garden is doing terrific however! The garlic has a good foot hold and we’re still enjoying last years harvest. I cook with garlic almost daily. Maybe that’s why I only have a few friends. They’re probably garlic lovers too. The ground cover of winter rye and some such other stuff has filled in nicely. And the spaghetti in the forefront there…… 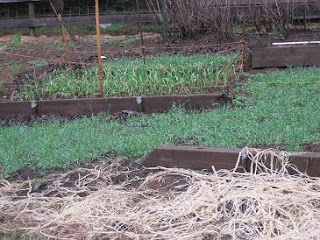 Too mushy. I like it el dente, with lots of garlic. So I tossed it. 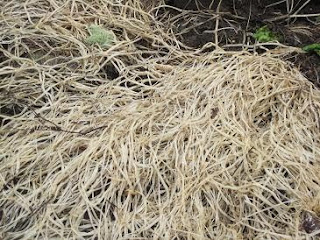 Okay okay, it’s lasts years Nasturtiums. See what a great winter ground cover dead Nasturtiums are. Because, as you might have forgotten. Bare dirt is not our friend. Bare dirt will invite weeds over to party when your not lookin’. And then leave you to deal with the mess when the party gets outahand.

The pea sized Nasturtiums seeds are lying there all snug. New plantlets will pop up in the real spring and I can easily move them around where I want them. Then, I can remove last years dead plant material to the compost pile.

You gotta try this friend. Pop a few of those Naturtiums into a well soaked and (organically) fertilized strawbale. Strawbales have a multitude of benefits and uses in the garden. This years strawbale planter will inevitably be next years compost additive (carbon), path mulch, or garden mulch. Perfect! 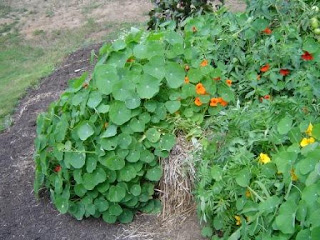 I’m so glad I didn’t attack the spaghetti when I allowed myself to be duped. (agin)